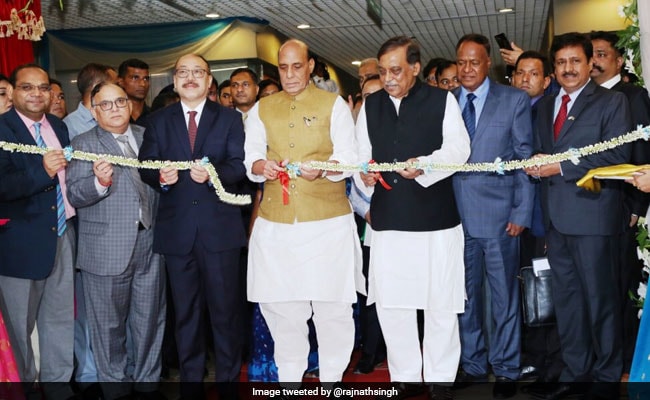 Rajnath Singh inaugurated the integrated centre at JFP along with his counterpart.

Indian High Commissioner Harsh Vardhan Shringla, who was also present, told the media that “this is the largest Indian visa centre in the world and possibly the largest anywhere”.

The new centre will replace the existing centres in Motijheel and Uttara from July 15.

The remaining two centres in Dhaka — at Gulshan and Mirpur Road — will also be shifted to this centre, located in a spacious 18,500 square feet commercial area, by August 31.

The existing e-token (appointment) system for submission of visa applications will also be withdrawn from July 15.

Bangladeshis constitute one of the largest numbers of visitors from a single country to India, the report said. Last year the country issued 1.4 million visas to Bangladeshi nationals.

India has 12 visa centres in Bangladesh, which is the highest number the former has in any country in the world, the report said.

On Friday, Mr Singh tweeted that India and Bangladesh have made “notable progress in transforming our land and maritime boundaries into zones of peace and tranquillity”.

His three-day visit is taking place in the context of the Home-Minister level talks held on a regular basis between India and Bangladesh, the Indian High Commission in Dhaka said.

The last such talks were held in New Delhi in July 2016.

Issues tied to security, border management, cooperation in countering illegal activities and travel arrangements are expected to be discussed at a meeting on Sunday.